Brian de Vries: The potential is vast, what’s needed is passion and perspective 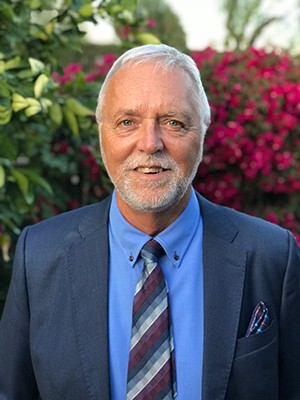 Editor’s note: This past January, ASA surveyed its members about what it takes to be a leader in the field of aging, what members would like to learn about how to develop leadership knowledge, skills and abilities, and who best personifies leadership. ASA members identified respected leaders in aging—many of whom are well known to the ASA community and to the field at large. This following Q&A with Brian de Vries is one in a series of leadership profiles we will feature in ASA's Generations Now blog in the coming months.

As his career progressed he found himself increasingly focused on trying to understand how people make meaning in life and in the experiences of loss; he focused on life review and life stories as ways of understanding how people make meaning even while enduring stressors. It was at SF State that he was provided the opportunity to explore LGBT aging, which then became his primary area of research.

He has several studies ongoing in Canada, including a three-year national study on advance-care planning, especially among ethnic minority groups, as well as another on advance-care planning in the LGBT populace. In the United States he is conducting a study comparing caregiving experiences among straight and same-sex spouses of people with Alzheimer’s or related dementias.

“So many LGBT people age alone, we wanted to create a network of people who could have meaningful conversations with one another,” de Vries said.

BD: The difference lies more in the field than it does in leadership. Aging is an inherently multidisciplinary field, and all-encompassing, so leaders need to be open to diversity, both in areas of study and in the paths people took to get to their positions serving and working with older adults.

BD: I’ve never liked the term networking but I’ve always been about connecting; to me, it has a more authentic, personal tone and context. Connecting also speaks to the multidisciplinarity of the field of aging, we’re not just gerontologists, but physicians, nurses, social workers and more, so rather than adhering to a network of professionals, we are connecting with other individuals who have diverse backgrounds.

With that idea as a model, I connected through reaching out after someone had published a paper or had written something, recognizing their work and asking if we could meet.

I have to say the ASA conference was a central vehicle in that, much more so than those of other professional organizations. It provides opportunities for people to actually connect. Also, ASA has constituent groups like LAIN, which has been central to my professional development. There are opportunities to meet with others in informal settings, have conversations, develop relationships—it was these sorts of interactions through which amazing projects (and insights, and relationships) evolved.

BD: I have a pretty traditional educational background, but overriding that is a model of education that says we’re all learners—faculty and students, at our own pace, asking different questions—that’s the model for me. That’s the sort of education I find most helpful. As a researcher learning from participants, presenting work to others, that kind of cycle of learning.

BD: Passion and perspective. People comment on how my excitement about studies or the research I’m describing is infectious. And because my research still really energizes me, I love writing, I love sitting down and analyzing data, I still get a thrill from it. To be able to channel that, to take that passion and express it in some form, in the work I do but also in how it is presented to others. That whole chain is needed—passion, perspective, expression. These are critical skills for leaders, without them you can’t excite or motivate others and share where you’re hoping to go and get others to join you on that path. 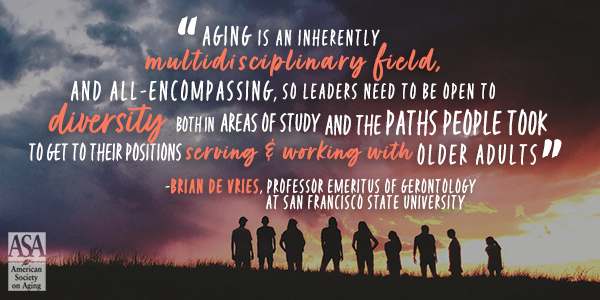 BD: I have worked with students who are really struggling to find their path, believing it to be gerontology but failing in their attempts. I always wonder how I can help redirect or support them. The challenge for me is to help people to find their passion, whether it be gerontology or some other field, and the path for the expression of that passion. The challenge lies in escorting or accompanying them along that path of discovery where their skill sets would be better placed and be more successful.

BD: The door is wide open, please just walk right in. There is so much to be done, and so much opportunity in so many domains that I think this is yours to discover, shape, form and influence. Grad students would ask me, when tasked with doing a thesis, what would you like me to do this on? Well, what needs to be done? Go to the library, read, pick up a couple journals, there are hundreds of thousands of publications. So much of what is there represents a particular cohort, and who knows if the experiences described in these studies will be the experience of your generation? And think of that situation unfolding endlessly, the potential is vast, and inspiring—of creativity, of effort, of energy.

Five Benefits of Spiritual Care for Older Adults with Dementia
posted 08.06.2020
Five ways that people who have Alzheimer’s and other dementias benefit from spiritual and/or religious care provided in a long-term care residence Read More
Help us improve our website! The first 20 people to spend 5 minutes participating in this study to help us improve our website will win a $10 Amazon gift card!
I'll do itNo thanks