The Three Spheres of Aging in America: The Affordable Care Act Takes on Long-Term-Care Reform for the 21st Century

Editor's Note: This article is taken from the Spring 2011 issue of ASA's quarterly journal, Generations, an issue devoted to the topic, “The Affordable Care Act: A Way Toward Aging with Dignity in America.” ASA members receive Generations as a membership benefit; non-members may purchase subscriptions or single copies of issues at our online store. Full digital access to current and back issues of Generations is also available to ASA members and Generations subscribers at Ingenta Connect. For details, click here.

All public policy, whether supporting public or private goals, is built to solve a specific human or social problem. As a result, the very nature of policy making is by degrees reactive and static, created from a combination of historical facts, current conditions, and future projections. The product from these debates often is built on compromise, with analysis of effectiveness left for future generations. The corridors of public life are filled with challenges and opportunities, big and small, so that once a “solution” is hammered out, attention turns to other pressing questions of the day. So what does this mean for policy set to address aging issues?

Aging policy in the United States across the twentieth century has occurred in fits and starts, more punctuated equilibrium than gentle evolutionary gradualism. Aging policy in the United States has focused on three domains of security for older Americans: economic security, health security, and functional security (see Figure 1). The twentieth century witnessed major changes in the economic and health spheres of aging, creating the need to address the third and newest sphere of security when physical and cognitive function start to fail.

Figure 1: The Three Spheres of Aging in the United States 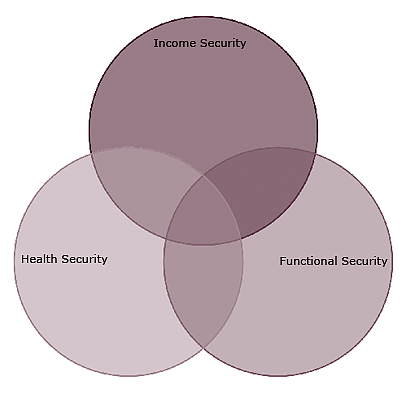 The passage of the Social Security Act in 1935 squarely addressed the issue of economic security and fundamentally defined and changed the way the country thought about supporting populations as they age. The addition of Supplemental Security Income in 1956 and Social Security Disability Insurance in 1972 further built out the program. Over the latter half of the twentieth century, public policy focused on advancing private solutions, including defined contribution plans and retirement savings programs such as 401(k) and 403(b) plans.

The passage of Medicare and Medicaid in 1965 addressed policy solutions focusing on health security for older and low-income Americans. Much public policy in recent decades has focused on the development of public–private partnerships to improve the effectiveness and efficiency of these programs through the use of managed-care techniques. A robust set of private sector solutions, such as Medigap and retiree supplemental insurance, has been supported through policy initiatives.

In the sphere of functional security, a vibrant mix of public and private solutions resulting from a broad policy framework is simply not to be found. Arguably, the first major policy initiative to support functional security is the Older Americans Act of 1965, which was visionary but inadequately funded. Almost by default, the Medicaid program through its funding of long-term care (predominately nursing facilities) for the poor has become the significant policy initiative that supports the needs of vulnerable elders.

While private long-term-care insurance dates back to the 1970s, these programs have never captured more than 8 percent of the market (Georgetown University, 2007). An attempt to create catastrophic coverage within Medicare was passed in 1988. In less than two years Congress repealed it, largely because elders resented a new tax to cover the cost of the expanded coverage.

For Americans older than 65, there is a 70 percent chance that they will require some form of long-term services and supports in their lifetime (Kemper, Komisar, and Alecxih, 2005). On average these services and supports will be required for three years, although the range is quite broad, with roughly 20 percent requiring five or more years (O’Shaughnessy, 2010).

The reality is that a significant number of older adults find themselves with chronic illnesses or some level of functional limitation. Medicare beneficiaries with five or more chronic conditions represent almost 80 percent of all Medicare spending (Anderson, 2010). People with chronic conditions and functional limitations are even more likely to use healthcare services (The Lewin Group, 2010). Most elders find themselves completely unprepared and overwhelmed by these health status changes and increasing functional needs: some individuals spend all their resources to pay for health and supportive services, become impoverished, and find themselves completely dependent upon a patchwork of public programs. Ultimately, Medicare and Medicaid bear significant costs for this care.

Polling and health services research data have shown time and time again that most people do not understand the strong likelihood that they will need long-term services and supports as they age. Why is this? One reason is that longevity and the demographics of illness and death have changed dramatically over the last century. Looking at the top ten causes of death in 1910 compared to 2007, the ratio of acute to chronic conditions is reversed (see Table 1). In 1900, the average life expectancy was 49 years. In 1935, the year Social Security was enacted, it was 62 years. In 1965, when Medicare and Medicaid began, it was 69 years. In 2007, the average life expectancy reached an all-time high of 78 years (Xu et al., 2010).

Social Security, Medicare, and Medicaid were all enacted at times when anticipated life expectancy was much shorter and with much less burden of chronic illness. Instead of a few years of support, these programs now provide decades of assistance, a change in demography with considerable stress on the trust funds for both Medicare and Social Security. In 2009, prior to the passage of the Patient Protection and Affordable Care Act (ACA), the solvency horizon for the Medicare Trust Fund was approximately eight years and for the Social Security Trust fund less than thirty years (Boards of Trustees of the Federal Hospital Insurance and Federal Supplementary Medical Insurance Trust Funds, 2010; Board of Trustees of the Federal Old-Age and Survivors Insurance and Federal Disability Insurance Trust Funds, 2010). A looming projection is that by 2030, Medicare and Medicaid will consume one-third of the federal budget (Linden, 2010).

Impacts of the Affordable Care Act

One important impact of the ACA is that it extends the solvency of the Medicare Trust Fund by an additional twelve years, more than doubling the solvency horizon (Boards of Trustees of the Federal Hospital Insurance and Federal Supplementary Medical Insurance Trust Funds, 2010). Less pressing but also on the agenda is addressing the Social Security Trust Fund. It is important to recognize that the three spheres of security are interrelated and dependent upon each other to a significant degree. The new health law also provides some important opportunities to fundamentally improve the state of public policy and programs in the sphere of functional security.

The most significant policy advance in the functional security sphere is the Community Living Assistance Services and Supports (CLASS) Plan, which will provide a daily cash benefit that an eligible beneficiary can use to purchase services and supports based on their needs. While the daily cash payment will not be large enough to cover the cost of a nursing home, it will go a long way toward providing for home- and community-based services that could forestall or prevent the need for eventual nursing home placement.

According to the Congressional Budget Office, CLASS is projected to save the federal government almost $2 billion in federal Medicaid costs (Congressional Budget Office, 2009). There are likely state-level Medicaid savings as well, because tomorrow’s vulnerable individuals with access to the CLASS benefit will likely spend down more slowly to reach the Medicaid poverty threshold. CLASS fundamentally changes the policy paradigm for vulnerable elders from a poverty-based discussion to one that allows for planning and personal responsibility.

Also within the ACA are important opportunities to improve healthcare for impoverished elders served through Medicaid. These opportunities include incentives for states to modernize, restructure, and expand home- and community-based services programs such as the State Balancing Incentive Payments Program and the Community First Choice option. Other efforts include extension of the Money Follows the Person Demonstration and new flexibility for home- and community- based services within Medicaid state plans. Many of these new Medicaid opportunities may prove challenging for interested states to implement because of the recession and their balanced budget mandates, but they symbolize new opportunities to create efficiencies within the system.

The ACA also created two entities within the Centers for Medicaid and Medicare: the Federal Coordinated Health Care Office, informally referred to as the Duals Office, and the Center for Medicare and Medicaid Innovation, also known as the Innovation Center. The Duals Office is tasked with reducing the administrative and legal barriers that prevent financial and programmatic coordination across these two important programs; it will also focus on supporting state-level pilots to test models that should improve care and reduce costs. The Innovation Center is specifically charged with testing an array of new models that could substantially improve the lives of vulnerable elders. These models include different payment systems, such as bundling payments, as well as specific interventions to improve some of the most intractable problems of the day, such as medication errors and preventable rehospitalizations.

Taken together, these specific policies, as well as many others in the ACA, represent an important opportunity to create a new foundation for long-term services and supports in the future. This foundation will only prove successful if these policy changes are implemented in ways that result in a more integrated and person-centered approach, as opposed to the perpetuation of the siloed program models that exist today.

The Challenge of the Century

Over the last century, public policy has supported and developed important advances both in the public and private sectors to help people prepare for their retirement years. Older Americans have far more resources available to them to address economic and health security needs than were available for their grandparents or great-grandparents. Medical advances have added years, even decades, to people’s lives, but for many, a handful of those years will come with significant functional limitations. The ACA provides important opportunities to build the infrastructure that meets their individual needs. The challenge of this century will be to take on this third sphere of security—to address serious functional needs as we age, in ways that support robust, coordinated public and private solutions.

Bruce Chernof, M.D., is president and CEO of The SCAN Foundation, Long Beach, Calif. He is guest editor of the Spring 2011 issue of Generations.

The Lewin Group. 2010. Individuals Living in the Community with Chronic Conditions and Functional Limitations: A Closer Look. Final Report for the Office of the Assistant Secretary for Planning & Evaluation, U.S. Department of Health and Human Services. Falls Church, Va.: The Lewin Group.