From Epidemic to Longevity: The Evolving Story of Aging with HIV 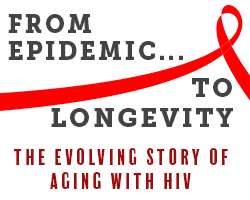 The story of aging and HIV is one no one expected to tell. “We were all making preparations to die. No one considered aging,” recalls Tez Anderson, a long-term HIV survivor who was diagnosed in 1983 at age 26, outlived many friends, coined the term AIDS Survivors Syndrome (ASS), then a decade ago founded the organization Let’s Kick ASS in Francisco. “I want to put us on the map,” Anderson says.

Thanks to advances in treatment, it is now possible and even common to live with HIV for decades. About half of the 1.1 million people living with HIV in the United States today are ages 50 or older; by 2030, that number could reach 70 percent. It’s time we understand and respond to this remarkable success story and its inherent challenges.

While ages 50 and older may seem young for aging services, lived experience says otherwise. Many people living with HIV experience a cascade of health challenges, even when their HIV is well-controlled. Sometimes referred to as “accentuated aging,” this can include classic geriatric syndromes (such as sarcopenia, falls, frailty and limitations in function) and multiple chronic diseases at younger-than-normal ages. It’s ironic but people aging with HIV who are under the care of a provider are more likely to die from cancer than from anything else.

Add social isolation; stigma; social, racial and ethnic inequities; and economic stress to the equation, and the result is a group of people who need and deserve aging- and geriatrics-expert help.

Getting the right help isn’t as easy as it might sound. Two well-developed systems exist, one for HIV services and another for geriatrics and aging services. Both are peopled by compassionate, committed, and skilled practitioners; but they are highly siloed and have little knowledge of one another’s resources or expertise.

As a result, people living with HIV often age into “no man’s land.” They may receive good HIV care from a clinic or specialist, but as their care needs evolve with age, these providers often are unable to manage their many non-HIV co-morbidities. Seeking treatment in a non-HIV setting can be traumatizing, and fear of stigma or being “outed” scares some people away.

“Getting an HIV diagnosis at any age is traumatic. Most HIV docs do trauma-informed care,” says Maile Karris, MD, associate director of the San Diego Center for AIDS Research Clinical Investigations Core at UC San Diego. “It’s why we see ourselves as advocates as well. That’s a very different perspective from other providers.”

As the profile of the HIV/AIDS epidemic has changed, issues of diversity and social justice have surfaced. The fastest growth in new infections is in the African American and Latinx communities, and women now account for a quarter of all people living with HIV. The impact for minority gay men is mind-boggling: at current rates of transmission, half of black gay men and a quarter of Latino gay men are projected to acquire HIV in their lifetimes.

‘Social Support Keeps You in Care’

Good care requires more than medication. Stigma and social isolation often cause people to delay testing or to stop receiving care. Other challenges include higher rates of substance use disorders, depression and PTSD. Neurocognitive disorders (including dementia) are common.

“I started our group because I think social support is huge,” says Malcolm Reid, program manager of the Silver Lining Project in Atlanta, where the membership is composed of older same-gender-loving men of color. “Social support keeps you in care.”

Care for the whole person and attention to social determinants of health is important in HIV care. While some older people with HIV are thriving, others have spent years on disability or live on very low incomes with little housing, mobility or food security.

Moving Ahead Together: HIV/AIDS and Aging Services

Both sides of the care coin (aging and HIV/AIDS services) need to learn from each other. Grantmakers In Aging (GIA) is now engaged in our second year of work toward this goal, with support from Gilead Sciences. Our publication Aging Positively: Bringing HIV/AIDS into the Aging Services Mainstream explored many of these themes for a philanthropic audience, but the disconnect between the two key service sectors and the many policy and awareness gaps call for a multidisciplinary response.

Through our Moving Ahead Together: HIV/AIDS and Aging Services initiative, we are working with a steering committee of leaders from the aging and HIV fields to draft a framework of recommendations for coordinating, strengthening and sometimes changing conditions on the ground, while supporting others who share these aims.

“Most people in these fields want to provide the best service, to be compassionate and helpful, but that doesn’t mean they know how to do it, or that the systems aren’t also in the way. Willingness doesn’t mean that people are ready,” says committee member and longtime ASA friend Karen Fredriksen Goldsen of the University of Washington School of Social Work.

The Moving Ahead Together framework will offer expert-informed recommendations on subjects like opening lines of communication between HIV and geriatrics providers; continued cultural competency training in all care settings, including outpatient, community, hospital and long-term care; enhanced mental, behavioral and psychosocial care and support; caregiving issues; and policies related to stigma, discrimination, de-criminalization of HIV, Medicare, Medicaid, Social Security and SSI disability, long-term care, the Older Americans Act and more.

Aging with HIV is still a relatively new phenomenon, but the lives of some of the most vulnerable, stigmatized and systematically excluded people in our society hang in the balance. The challenges facing these resilient survivors of an all-too-recent epidemic should resonate with all of us. And we should listen closely to their stories, because this narrative is far from over.