The aging prison population crisis is gaining international attention as researchers, scholars, journalists, human and civil rights advocates detail the rapidly growing numbers of older adults in prison and the high human and economic costs of warehousing older adults in prison, according to 2012 reports from the ACLU and Human Rights Watch. 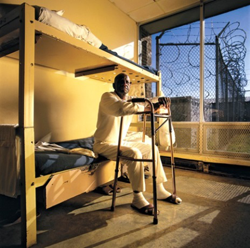 In 2010, colleagues and I conducted a study (“Trauma and Coping among Older Adults in Prison: Linking Empirical Evidence to Practice,” forthcoming in The Gerontologist) of 667 adults ages 50 and older in a northeastern state prison system. Study findings revealed the previously overlooked issue in this population of undetected and untreated cumulative traumatic life experiences and their cost to prisoner’s physical and mental well-being. Such experiences occurred prior to entering prison, while in prison and in anticipation of release from prison.

As a group this aging prison population has experienced a lifetime of cumulative disparities and discrimination based on characteristics such as age, race or ethnicity, physical and mental disabilities and substance-abuse histories, as well as social structural factors such as poverty, lack of education and punitive sentencing policies.

Some lifetime and cumulative experiences include: childhood or adult exposure to violence (being a victim or witness to physical or sexual assault); unexpected and expected loss of a loved one; caregiving stress; medical neglect; family separation; being diagnosed with a serious physical or mental illness; discrimination (based on race, gender, sexual orientation); homelessness; combat in war; and, natural and manmade disasters. 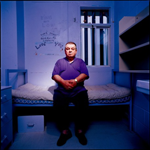 About two out of three participants reported experiencing trauma and stress in prison, such as being physically and sexual abused, bullied, neglected, exploited by staff and younger inmates, denied food and water and put in solitary confinement (see Figure 1, above).

Many participants also reported lingering subjective distress from earlier life experiences, including from childhood, and the influence of such distress on their current physical and mental well-being. Past and current subjective distress included feeling horror and worry that someone would get hurt at the time of the event, and feeling moderately to extremely affected by these events in the past year.

Table 1: Coping Resources and Resilience Among Older Adults in Prison

The older adults in prison who reported coping resilience also were more likely to report higher levels of physical and mental well-being. 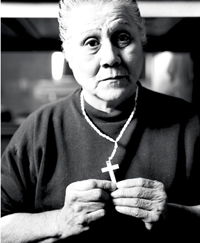 As the findings show, lifetime experiences of multiple types of trauma, stress, grief, separation and loss are common among older adults in prison. What we call “policy” trauma also may occur as a result of punitive prison policies and practices, which in turn place elders at risk for later-life physical and mental decline.

Clearly, these are areas that classify as elder justice and human rights issues. These rights include not being subjected to torture and cruel and unusual punishment, rights to family, social and economic security and the right to health and well-being. It is important to note in our study findings that there are stories of triumph over adverse life circumstances and stressful conditions of confinement, too.

As the human rights and elder justice movements advocate for elder rights, we must not neglect older adults behind bars. The aging community can take a leadership position and build a coalition to advocate for more compassionate practices in the criminal justice system. These types of practices would foster human dignity, respect and positive coping, especially for older adults. Infusing compassion, forgiveness and mercy into our interactions with and study of older adults in prison holds the promise of disconnecting the link between traumatic grief and recidivism. It also has the potential to foster reconciliation between the survivors of crimes and those who committed them.

Tina Maschi, Ph.D., L.C.S.W., A.C.S.W., is an associate professor at the Fordham University School of Social Service in New York City, and founder and executive director of the Be the Evidence Project.

Images courtesy of the Ron Levine, Prisoners of Age

Help us improve AgeBlog and rate this post by clicking here!

“Trauma and Coping among Older Adults in Prison: Linking Empirical Evidence to Practice,” by Tina Maschi, et al. (in press)

“The High Cost of the International Aging Prisoner Crisis: Well-Being as the Common Denominator for Action,” by Tina Maschi,  Deborah Viola and Fei Sun

“The Heterogeneity of the World Assumptions of Older Adults in Prison: Do Differing Worldviews Have a Mental Health Effect?” by Tina Maschi and Judith Baer

“The Aftermath of Childhood Trauma on Late Life Mental and Physical Health: A Review of the Literature,” by Tina Maschi, et al.

“Forget Me Not: Dementia in Prisons,” by Tina Maschi et al.

“Trauma and Stress Among Older Adults in the Criminal Justice System: A Review of the Literature with Implications for Social Work,” by Tina Maschi, et al.