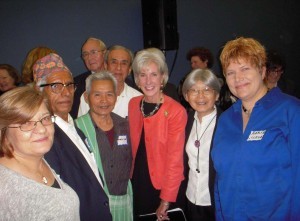 Editor’s note: The SCAN Foundation, The John A. Hartford Foundation, the Administration for Community Living, the Gary and Mary West Foundation, the Marin Community Foundation and the Colorado Health Foundation have united to fund a three-year grant to develop and estab­lish the Aging and Disability Business Institute (goo.gl/nz7ykU), housed with­­­in n4a. Under the grant, ASA and n4a are collaborating on a series of articles and case studies in Aging Today that will help to prepare, educate and support community-based organizations and healthcare payers to provide quality care and services.

Marta Pereyra has an affinity for helping minority communities and a passion for help­ing older immigrants and refugees in particular, but she also has a head for business and a talent for persisting until things get done to her satisfaction. Pereyra, who is an immi­grant from Poland, is executive director of Illinois’ Coalition of Limited English Speaking Elderly (CLESE; clese.org), and has served in that capacity for the past 10 years.

When the concept of managed care reached Illinois, Pereyra realized that it was a unique chance to bring ethnic communities and health plans closer together, and let them get to know each other. She proposed to partner with managed care health plans and referred CLESE’s non­profit’s interpretation and translation services to healthcare plans, developing innovative partner­ships with multiple entities. CLESE’s entire focus is to ensure that limited English-speaking older adults have equal access to the community-based services they need.

Among many health education programs led by CLESE that focused on ethnic elders, it operated an Alzheimer’s Demonstration Project that linked elders having memory issues to services and medical exams, and helped families via education and support. Currently, CLESE, in collaboration with minor­ity communities and providers, conducts Savvy Caregiver classes for ethnic caregivers to expand their knowledge and support them in that role. Other CLESE programs, projects and activities include: con­ceiving of and running the Bright Ideas project, which provides English literacy instruction for low-lit­erate older adults; assisting older refugees with opportunities for socialization and information through the Illinois Refugee Social Services Cultural Adjustment Project; creating and running an urban farm for newly arrived refugees, who often know how to farm, but don’t how to navigate the system; advocating for equal access to services through contracts with the Illinois Department on Aging and collaborations mentioned below; implementing an elder abuse, neglect and self-neglect intervention program in ethnic communities through the Chicago Department on Aging; offering verbal and written translation ser­vices for immigrants; and providing mentoring and technical assistance to ethnic providers of home- and community-based services.

In 2011, when a mandate was issued in Illinois that by 2015, 50 percent of all Medicaid bene­ficiaries were obligated to enroll in the managed care system, it created an opportunity for nonprofits such as CLESE to create new services, and to help their older clients in the com­munity. CLESE’s first step was to knock on health plan headquarter doors (literally) and in­troduce the organization to plan leadership. Crucially, Pereyra emphasized that CLESE was a gateway for health plans to connect with ethnic minority communities—about which she noted these health plans knew little about. Additionally, CLESE offered language as­sistance for care coordination processes, by supplying interpreters conversant in more than
80 languages.

“It was interesting to learn that these health plans had limited knowledge about home- and community-based services. They mostly knew how to manage medical services, acute care—every­thing related to the hospital setting and nursing home industry, and not much about the commu­nity. That’s when I realized CLESE could really be of help, by bringing ethnically diverse commu­nities closer to managed care,” Pereyra says.

She set up monthly meetings, inviting health plan representatives into the local minority com­munity, wherein immigrants and refugees were providers running social services. For 25 years, CLESE had a grant with the Illinois Department of Aging to provide technical assistance and sup­port to 30 ethnic providers of home- and community-based services in Illinois. Once the managed care transition had started, each month Pereyra brought these providers to meetings with the man­aged care leadership she had met, where they all got to know one another. Both sides were learning how the new structure of managed care worked. Ultimately, Pereyra hoped the original network of providers would learn enough to forge independent relationships with healthcare plans.

The health plans appreciated that CLESE had facilitated the process of building partnerships, so Pereyra offered CLESE’s services as a resource to the plans, to engage with hard-to-reach im­migrant populations that speak one of the 100 languages for which CLESE could provide transla­tion services.

These monthly (and later, quarterly) meetings proceeded for two years. By 2014, CLESE secured contracts with managed care plans such as Aetna, Cigna and Humana, serving as the link between healthcare plans and their limited English–speaking members. CLESE ac­­­com­­plished this with a staff of only five full-time employees, using 120 independent interpreters and subcontractors.
Due to the shift from grant-based revenue to direct services, CLESE also had to begin collecting data to demonstrate outcomes. Previously, Pereyra says, they had only collected the data required by whichever grant they were fulfilling at the time. Now they were “vitally” interested in docu­menting their translation work. The data show that on a daily basis they work in 30 to 40 lan­guages and serve close to 4,000 individuals per year.

Perhaps the toughest part of this process for Pereyra is that the managed care landscape is con­stantly changing. Though she knows that CLESE’s work is necessary and vital to the older adults the organization serves, if a health plan’s leadership suddenly decides they will rely instead upon telehealth translation or an iPad application, it is hard to change their mindset, to impress upon them the value of face-to-face contact.

At the same time, such market vagaries have enabled Pereyra to see the importance of training her staff: all CLESE interpreters are well-versed in managed care coordination, from Medicare to Medicaid to long-term services and supports. CLESE staff and subcontractors are some of the more knowledgeable in the realm of community-based organizations (CBO).
She has wholeheartedly embraced an attitude commonly cultivated by many successful CBOs, and that is to never give up. “The fact that the system is changing around us gives us … headaches, but it’s a tremendous opportunity for new ideas, and it pushes us to better serve our clients, to overcome old stagnant habits and create new [more effective] ones,” says Pereyra.

CLESE, she says, is now a more business-like organization, actively forging opportunities for new business and then seeing the funding follow. She is thrilled that CLESE has produced a viable product that has improved the lives of older adults who have limited English-speaking skills. “It’s an ideal way of meeting our mission,” she says.

Such forward-thinking creativity has earned CLESE and Pereyra the John A. Hartford Founda­tion 2018 Business Innovation Award, from the Aging and Disability Business Institute (ADBI), for the partnerships it has made to help older adults with limited English-speaking skills com­­­municate effectively with their healthcare providers.

“By helping to break down barriers faced by people who do not speak English, CLESE has im­proved the health of and increased the likelihood that its clients will be able to continue living at home and in the community as they age,” said Sandy Markwood, CEO of the National Asso­­ciation of Area Agencies on Aging (n4a), which leads the ABDI.

“We didn’t expect it,” says Pereyra of the award, which was given this past July at n4a’s annual conference. “But it is a great joy … [and] seeing CLESE on the map with so many other great pro­viders was a humbling experience.”