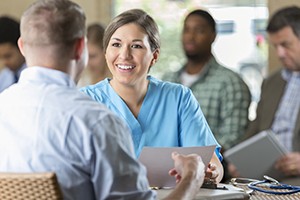 One million immigrants are employed in the direct care workforce in the United States—as personal care aides, home health aides and nursing assistants who provide daily hands-on assistance to older adults and people with disabilities. The ever-rising de­mand for direct care workers means immigrants will continue to play a critical role in the nation’s long-term-care system. However, federal policymakers may restrict the flow of im­migrants to America. If they succeed, employers would need to expand the supply of available workers by recruit­­­­-ing new populations into the direct care workforce.
Immigration Policy Impacts Workforce Ranks
The current federal debate over immigration policy should recognize the importance of immigrants to the long-term-care delivery system. Over the past decade, the share of immigrants in the direct care workforce has been increasing: in 2015, one in four direct care workers was an immigrant, com­pared to one in five in 2005. Immigrants will be key to meeting the growing demand for long-term care—by 2026, the direct care workforce is projected to reach 5.8 million.
The immigrants working in direct care come from 161 different countries; half of these workers, who hail from Mexico, the Dominican Republic, the Philippines, China, India and Vietnam, are those most likely to rely on family ties to legally immigrate. Currently, the family-based path to legal status often is the only one available to these immigrants.
Policies that limit immigration could worsen existing shortages of direct care workers across long-term-care settings. The Reforming American Immigration for Strong Employment (RAISE) Act would reduce legal immigration from 1 million people annually to around 500,000. This would hap­pen largely through cuts to family-based immigration, steeply restricting the number of spouses, chil­dren, parents and siblings that citizens and legal permanent residents could sponsor for immigration.
President Trump, in addition to championing the RAISE Act, has signed executive orders to limit immigration; some of these orders broadened deportation priorities and removed protec­tions for undoc­umented immigrants who arrived at a young age. During the first three months of the Trump Admin­istration, immigration arrests rose by a third.
Another separate order seeks to ban pe­­ople from Chad, Iran, Libya, Syria, Yemen, Somalia and North Korea, but federal courts have temporarily blocked this policy. If the so-called travel ban takes effect, it also could have a direct impact on long-term care—more than 10,000 immigrants in direct care are from travel-ban countries. The ban would disproportion­ately affect long-term care in Minnesota, where one in seven immigrants working in direct care is Somali, totaling more than 2,000 workers. Minnesota is already experiencing a slowdown in So­mali refugee resettlements, a trend that may be related to uncer­tainty around immigration policy.
The precise effects of these policies on the supply of direct care workers is unknown, but immigrants in direct care are likely distressed when they are threatened by deportation, or when they see their friends and family members deported or disallowed from immigrating. This may hinder their ability to be fully present on the job, which could undermine relationships between workers and consumers.
For example, Encuentro (a nonprofit organization in New Mexico) offers home health aide training for Latino immigrants, but immigration-related anxieties (among other factors) could dissuade pro­gram graduates from entering the workforce. There are long waiting lists to enroll in the training course, but many new aides do not seek employment. “Since the election, people have wanted to limit their activities outside of the home,” said Andrea Plaza, the organization’s executive director.
New Recruitment Strategies Needed
If the flow of immigrants into America slows, employers could tap into new pools of workers. For example, recent retirees could join the direct care workforce in higher numbers. Compared to prime-age workers between ages 25 and 54, labor force participation drops off among retirement-age adults older than age 55, but such workers value flexible scheduling and meaningful work—two characteristics of direct care jobs. Though older workers may be more likely to be injured on the job, this risk could be offset by high-quality training on proper lifting tech­niques and by ensuring workers have access to assistive technologies (such as Hoyer lifts).
Employers are also interested in recruiting younger workers. Labor force participants between ages 16 and 24 experience higher unemployment rates as com­pared to prime-age workers. Employers could fill vacant direct care positions through targeted recruitment of high school or college students seeking part-time work. According to recent data from PHI, a leading authority on the direct care workforce, once they are hired, younger people are more likely to remain in direct care jobs if they receive additional on-the-job supports, like coaching sessions with their peers and supervisors.
Finally, men are far less likely to work in direct care than women, but they are a growing seg­ment of this workforce. From 2005 to 2015, the number of men working in direct care grew from 310,000 workers (11 percent of the workforce) to 489,000 workers (14 percent of the workforce). Though we need more research on male recruitment strategies, one possibility is to target job descriptions specifically toward men by using descriptors that draw them in, such as “superior,” “exceptional,” “proven” and “manages.” This tactic may increase men’s likeli­-
hood of applying for direct care jobs.
Recruiting and retaining new populations of workers also will hinge on improving the quality of direct care jobs. Paying living wages, offering high-quality training, and showing greater respect for direct care workers would help make these jobs more attractive.
Stephen Campbell is a policy research associate at PHI in New York City.
Editor’s Note: This article appears in the January/February 2018 issue of Aging Today, ASA’s bi-monthly newspaper covering issues in aging research, practice and policy nationwide. ASA members receive Aging Today as a member benefit; non-members may purchase subscriptions at our online store.