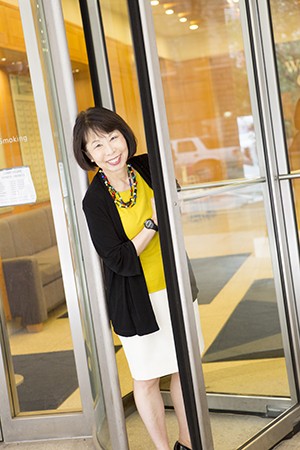 Editor’s note: This past January, ASA surveyed its members about what it takes to be a leader in the field of aging, what members would like to learn about how to develop leadership knowledge, skills and abilities, and who best personifies leadership. ASA members identified respected leaders in aging—many of whom are well known to the ASA community and to the field at large. This following Q&A with Jeanette Takamura is one in a series of leadership profiles we will feature in Aging Today and online in the coming months.

Jeanette Takamura served from 2002 to 2016 as Columbia University’s first woman dean of the School of Social Work. During that time, she established nine global research centers, tenured a record number of faculty (many of whom are public intellectuals for the nation) and pursued diversity as a focus. Prior to this, she served under then–Secretary of Health and Human Services, Rep. Donna Shalala (D–FL) as Assistant Secretary of Aging in the second Clinton Administration.

Currently, Takamura is a full-time professor and dean emerita of the Columbia School of Social Work, teaching online courses (from her home in Hawaii, until New York City returns to normal) on federal policy and on long-term care.

Jeanette Takamura: Leadership is a generic practice, but I think leadership becomes more nuanced in the social, political and economic contexts of issues such as aging—especially as  our country still has a tendency to be uncomfortable around aging issues as an explicit priority. It takes real grit to get things going and then skilled communication to sustain the conversation so it is fresh and relevant in contemporary terms.

JT: I never consciously “networked.” Instead I reached out to people based on issues on which I was working or in which I was interested. In a pre-LinkedIn, pre-Facebook environment, you probably reached out because you  were curious about an issue or to get to best practices. Today, sometimes networking feels like an end unto itself to some who are prolific in their engagement.

Some 40 years ago, I not very consciously networked through ASA’s Aging in America conferences, and later through other organizations such as the National Association of States United for Aging and Disability. I was Hawaii’s state director for aging for eight years and then deputy director of the state’s department of health and got to know lots of people in leadership in the states across the country and at the national level.

JT: The education I found most helpful came from more than academic institutions. After I received my master’s degree, I spent two years figuring out what else I needed to know. Most people in academic programs unrealistically think they will learn everything in the process of acquiring certain degrees, but rarely if ever is this true. I ended up with more questions during my graduate education for which I pursued answers independently.

For two years following my M.S.W. education, I went into intensive training programs of all kinds. I wanted back then to be a very good family therapist, so I completed trainings on therapeutic interventions and communications techniques. But I ended up doing aging and policy work. Life happens and circumstances moved me from community and clinical practice into academia and then into state government, a federal appointment and finally back into academia. In every instance, at least a part of my portfolio included administrative responsibilities. By the way, I had great mentors.

I continue to learn. I subscribe to lots of publications and am constantly looking for and at information and data. One of the things I’ve always been cognizant of is how often we think   academic articles alone should drive practice. But it’s important to stay in touch with pop culture, because academic articles take two years to write, be reviewed and get into print, if not longer. During that gap between an emergent idea and a juried publication with scientific data to back it, a lot can happen. If you only focus on academic articles, you are missing a lot of available information that can offer a closer view of different communities and potentially new perspectives suggestive of innovations.

If we think about COVID-19, information Anthony Fauci is giving the nation is both academic and scientific, and fortunately is being communicated by creative communicators in performances and songs that are part of our pop culture. Thanks to both, we’ve seen social and behavioral practices change [dramatically] since the beginning of March.

JT: To be able to push aside your ego. Second: find people smarter than you are. Third: listen attentively to them. I have always looked for good budget people to work with me. You can have great ideas, but if you can’t implement them, it’s no use. Money, i.e., funding, and how to leverage it, is essential fuel for implementation.

JT: When I took the helm of the Administration on Aging (AoA), the Older Americans Act (OAA) had not been reauthorized, the budget was stuck—it had not increased in many years. I called together those who led different parts of the AoA and said, we’re going to put together a big initiative. At the time, they didn’t believe that was possible.

I began by asking staff to do a literature search around caregiving. I knew that in defending the organization’s mandate and serving this population, we couldn’t go in with the same old information and the same old initiatives, as important as they might be. We had to demonstrate a relevance that was contemporary. So Dr. Alfred Duncker was asked to calculate how many people reached age 60 each day in the U.S., for example. How do we define ourselves differently and take on a challenge that would recast AoA and give Congress the opportunity to reauthorize the OAA and authorize a new budget item (the National Family Caregiver Support Program)?

When we went through the budget review, [the chair of the department’s budget review panel] said it was the best presentation they’d ever heard. That buoyed my staff. When I had to present it later to Donna Shalala, I told my staff, ‘I have half an hour to do a presentation, but if I can’t sell it in less than 15 minutes, I can’t sell it.’ The research had to be hard-hitting, and the sell had to be quick. We did our homework, and I clocked it—13 minutes.

Donna Shalala made the final decisions on the budget, and she called every head of every agency. When she called me and said, ‘We’re going to give you another $50 million,’ I put the phone down and screamed so loudly that staff came running into my office, asking, ‘Where’s the mouse?!’

JT: Be sure that you build essential competencies, because you want to avoid being troubled by the ubiquitous imposter syndrome. Life is about learning that never stops.

Be clear about your commitments. Mine have always been to long-term care and to supporting the next generation of leaders. Our country hasn’t taken long-term care on in a concerted, comprehensive way that reflects a big vision, and the U.S. population has aged as we have dithered around. Know your commitment, and know that you will make mistakes. There are times when it will feel like you have been defeated forever, but that won’t be the case if you don’t let it be: cultivate resilience, be bigger than your fears and have enough confidence to jump back into action intelligently.

When I was at AoA, I asked my staff to answer one question at the end of each day: ‘What have you done today to make life better for older people in America? If you can’t think of one thing, then you are receiving a government handout.’