Jennie Chin Hansen: understand where you fit, embrace ambiguity—and know when to leave 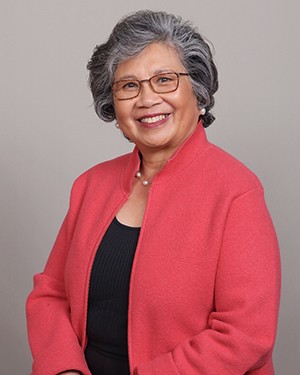 Editor’s note: This past January, ASA surveyed its members about what it takes to be a leader in the field of aging, what members would like to learn about how to develop leadership knowledge, skills and abilities, and who best personifies leadership. ASA members identified respected leaders in aging—many of whom are well known to the ASA community and to the field at large. This following Q&A with Jennie Chin Hansen is one in a series of leadership profiles we will feature in Aging Today and online at ASA’s AgeBlog in the coming months.

Jennie Chin Hansen is an independent consultant serving older adults living with complex health issues. She is consulting on a San Francisco initiative to develop Geriatric Emergency Departments focused on people with cognitive challenges. She also is a Stakeholder Advisory Committee member for California’s Master Plan for Aging and is a Commissioner on the Healthy California for All Commission; she was appointed to both positions by California Gov. Gavin Newsom.

From 2010 to 2015, Chin Hansen was CEO of the American Geriatrics Society. She served for six years on AARP’s national Board of Directors and was AARP’s president from 2008 to 2010. Prior to her work at AARP, she spent 25 years at On Lok Inc., a nonprofit family of organizations providing comprehensive community-based services for frail elders in San Francisco, and served for 10½ years as its CEO.

Jennie Chin Hansen: Unique to people leading in the field of aging is that many of us take a life-cycle perspective—thinking about aging as a [natural] part of life—and we also are willing to address difficult things. There is a positive side to aging, and the general public gravitates toward a sense of hopefulness, but those of us who are deeply immersed in the field are willing to address life’s vicissitudes, to acknowledge the fragilities of living and to stress the importance of interconnectedness. 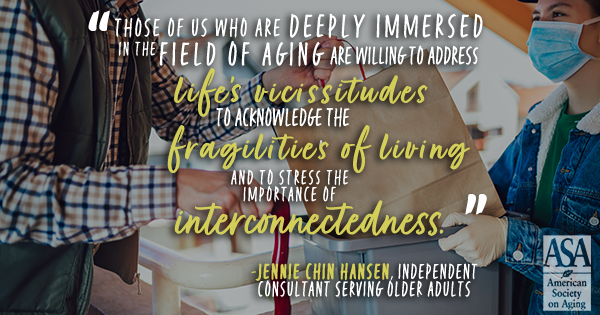 JCH: I fell into it. When finishing my Bachelor’s degree, I came to the University of California, San Francisco, for graduate work in nursing. But I came from a public health–community health background.

I didn’t fit in with traditional nursing academia even though I ultimately taught at three schools of nursing. I landed at a program called North East Medical Services in San Francisco, one of the first community clinics under President Johnson’s War on Poverty. It later became what is now known as a federally qualified health center. That kind of setting was more in my zone of where I might be more effective on the “turf of the home and community.”

The conventional wisdom is to do what you need to do to fit in, then kind of grit through it. But I’ve always been someone who has an intuitive sense for the settings where I’d learn most and could best contribute. Know where you fit, and be willing to walk away and find the soil in which you can thrive.

JCH: I had a very traditional early education, then went to a Jesuit college where everything was mapped out. Then I came to UCSF, which in 1970 was like a bohemian school. They told me to design my own curriculum, which was a radical change. They said to ask: ‘What do you want your outcome to be?’ I didn’t know.

I ended up working in the community, dealing with everyone from high-risk juvenile delinquents to kids in a Presbyterian youth group. I was placed in that setting unmoored, and had to decide where to steer my boat. That ambiguity helped me to realize that I like ambiguity! I could not have done the work that I’ve done over my career without my solid exposure to ambiguity.

JCH: I think it’s a combination of openness and curiosity. The willingness to take chances. Leaders have to be open to ambiguity, because that’s where discovery comes in.

AT: Can you speak to one leadership challenge encountered on the job and how you met it?

JCH: Knowing when to leave a position. I had worked at On Lok where it seemed like I should stay forever. I was their second CEO—and had been at On Lok for 15 years when I assumed the helm and served as CEO for a little over 10 years. When I achieved the milestone of having the organization become a permanent PACE program, I realized my work was done.

The next phase of On Lok’s needed work didn’t appeal to me, and I felt I wouldn’t be good at it. When I recognized that my best attributes and emotive commitment were waning, I decided to leave, so that On Lok could get the right leader to successfully take the organization into its next chapter. Again, pay attention to where you fit!

JCH: This time is a heyday for opportunity and contribution. People must find what work suits them best—their ‘true north’—where they might fit in and where they can learn something new to help them become more capable professionals. There are many of us older leaders here in the ASA community, and in its Corps of Accomplished Professionals [CAPs) group, to draw upon. We are eager to listen, reflect and comment on their queries and our experiences, and to share perspectives with younger professionals—to help them on their own journeys of contribution and meaning.