Land of the Unequal? Economic, Social Inequality in an Aging America 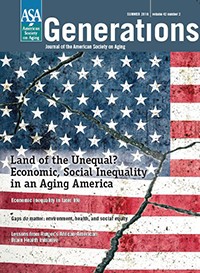 In “Economic Inequality in Later Life,” Guest Editor Karen D. Lincoln reflects on the cumulative social and economic advantages and disadvantages across the life course. Economic opportunities are determined by position in the social structure, and multiple social identities—race, class, gender, and sexual orientation—shape economic and social experiences, all of which accumulate across the life span and determine one’s economic status in later life.

David Takeuchi, Tiziana C. Dearing, Melissa W. Bartholomew, and Ruth G. McRoy, in their article, “Equality and Equity: Expanding Opportunities to Remedy Disadvantage,” explicate the difference between equality, which now generally means similarity of treatment, and equity, which is linked to social justice. The article also outlines an inventive intervention designed to reduce the social distance between black males (some who are in gangs) from poor neighborhoods and white, upper-middle-class professionals.

In “Gaps Matter: Environment, Health, and Social Equity,” Manuel Pastor and Rachel Morello-Forsch discuss why environmental justice is not as clear-cut as one might assume. New research finds that when environmental costs and benefits are unequally distributed, this can actually worsen environmental conditions overall, by diminishing the collective will to address fixing toxic hazards, air pollution, and other environmental problems. Put bluntly, people outside blighted poorer communities are not inclined to help combat these challenges if they are not directly experiencing the impacts of environmental degradation and pollution.

Robynn Cox, in her article, “Mass Incarceration, Racial Disparities in Health, and Successful Aging,” analyzes the impacts of mass incarceration on the African American community and on the cohort’s long-term health consequences. Given the role of the criminal justice system in the lives of minorities, and its deleterious effects, racial disparities in aging and health cannot be understood without fully comprehending the consequences of concentrated mass incarceration in minority communities.

“Sexual Orientation, Socioeconomic Status, and Healthy Aging,” by Bridget K. Gorman and Zelma Oyarvide addresses how older adults’ socioeconomic profile shapes their likelihood of living a long life relatively free of disease and impairment, and how bisexual elders have the lowest rates of completed schooling and live in lower-income households, both of which contribute to poorer health. Older gay men and lesbians fare better, and achieve higher levels of education, but their annual household income is similar to heterosexuals’ annual household income.

ASA is pleased to offer this latest issue of Generations, which will reach ASA members and subscribers in late June, early July. Single copies of the issue can also be purchased from our website.