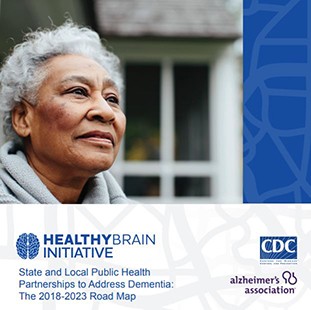 Dementia is an umbrella term used to describe symptoms characterized by the loss of cognitive function. These symptoms manifest in several different forms of dementia, but Alzheimer’s disease is the most common. Current estimates indicate that approximately 5.7 million Americans live with Alzheimer’s disease, and it is the 5th leading cause of death among people aged 65 years and older. By 2060, the number of Americans with dementia is estimated to reach nearly 14 million. In 2018, caring for people with dementia was estimated to cost the health and long-term care systems $277 billion, making it the most costly disease in America. Often, the burden of care falls on informal caregivers who are typically unpaid family members or friends. Each year, about 15 million of these caregivers provide an estimated $230 billion in unpaid care.

The Alzheimer’s disease continuum spans decades, lending many opportunities for public health to change outcomes across communities. The public health community can intervene by promoting health behaviors to reduce the risk of cognitive decline such as managing mid-life obesity and hypertension, encourage early detection and diagnosis of cognitive impairment and dementia, ensure the safety of people with memory issues, and improve the quality of care for people affected by dementia in their communities. These essential public health activities can help to reduce the burden, improve health outcomes, and promote health and well-being among both people living with dementia and their caregivers.

In 2007, the first Healthy Brain Initiative Road Map was released by the Centers for Disease Control and Prevention (CDC) and the Alzheimer’s Association to provide practical and expert-guided actions for use by state and local public health professionals in addressing cognitive decline. Since then, the Road Map has undergone two new iterations with the most recent version, Healthy Brain Initiative— State and Local Public Health Partnerships to Address Dementia: the 2018–2023 Road Map, released in late 2018. The 2018–2023 Road Map identifies 25 actions that state and local public health agencies and their partners can implement to promote cognitive health and address cognitive impairment and the needs of caregivers. The actions are categorized into four traditional domains of public health: monitoring and evaluation, education of the public, policies and partnership development, and assurance of workforce competency. The number of Road Map actions that have been implemented by state and local partners has grown dramatically in recent years—from just 19 actions in 2015 to 102 actions by 2018. This year, the Alzheimer’s Association and CDC, in consultation with the International Association for Indigenous Aging, will also be releasing a Road Map for Indian Country. This Indian Country specific Road Map is designed to support discussion about dementia and caregiving within tribal communities and can be used as a tool for tribal leaders. The Road Map series, including the new Indian Country Road Map, will be showcased at the upcoming 2019 Aging in America Conference in April in New Orleans, Louisiana.

Many state health departments have begun implementing programs and campaigns that correspond to guidance in the Healthy Brain Initiative Road Map. The Missouri Department of Health and Senior Services conducted a multifaceted social marketing campaign for the southeastern region of the state where their surveillance data analysis suggests the population has a higher risk of dementia. The campaign targeted families affected by Alzheimer’s and other dementias (both caregivers and people experiencing memory issues or dementia). Messaging raised awareness of the early signs of dementia; encouraged calls to the Alzheimer’s Association’s 24/7 helpline for information, referrals to health care professionals, and assistance; and educated all about linkages between good self-care and brain health. To help assure a competent workforce, the Minnesota Department of Health identified community health workers as a way to help caregivers and others in the community manage oral health among people living with dementia. The Minnesota Department of Health developed an educational module and partnered with training institutes for community health workers to train them in basic oral health care for older adults with attention to people living with dementia and its special challenges. Community health workers received a new flipchart that they can use to educate family caregivers about the oral health needs of family members in their care. To educate future public health professionals, the Alzheimer’s Association, CDC, and Emory Centers for Training and Technical Assistance have developed a free curriculum for undergraduate public health courses. Mapped to the Core Competencies for Public Health Professionals, faculty can use the flexible curriculum modules to increase the knowledge of Alzheimer’s disease and other dementias as a growing public health issue. The first curriculum module is now available as an online video at the Alzheimer’s Association website.

The CDC’s Alzheimer’s Disease and Healthy Aging Program has developed many data for action resources for use by states and other partners to help identify populations and communities most at need. The CDC and the Alzheimer’s Association have published both national- and state-specific infographics on subjective cognitive decline—which is the self-reported experience of worsening memory and is a common precursor to dementia—as well as infographics on caregiving. Additionally, the National Association of Chronic Disease Directors and CDC have produced topic-specific data briefs focusing on public health issues related to older adults. Subjective cognitive decline and caregiving data briefs are the first two in the series to be released and provide public health professionals with the most recent data available on health and aging-related conditions, including the importance of brain health, the management of chronic conditions, and caregiving burdens. The CDC also has a publicly available online aging data portal that can be used by researchers and others to examine associations between demographic characteristics, chronic conditions, and other health indicators among older adults.

As the proportion of older adults continues to grow and with it an increased number of individuals experiencing cognitive decline, the public health community must act now to stimulate strategic changes in policy, systems, and environments. The new Healthy Brain Initiative Road Map Series and data for action resources enable public health leaders to chart a course for a dementia-prepared future.

For more information about the Healthy Brain Initiative New Public Health Road Map, consider attending Healthcare and Aging Network (HAN) Special Program Session on Tuesday, April 16, 2019 from 2:30-3:30 pm at the Aging in America Conference in Strand 12B (Level 2) of the Hyatt Regency.

Benjamin Olivari, MPH is a Fellow with the Alzheimer’s Disease and Healthy Aging Program at the Centers for Disease Control and Prevention (CDC).

Molly French, MS is the Director of Public Health at the Alzheimer’s Association.