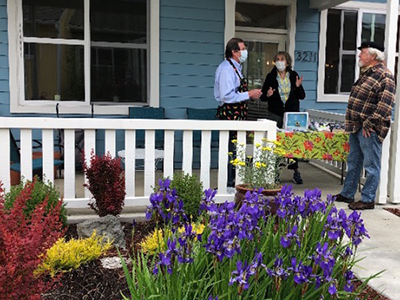 Recently the deleterious effects of social isolation and its exacerbation by stay-at-home orders have gotten a lot of press. The time is ripe to consider housing for older adults and whether, generally, it aids social connection or prevents it. Architect Charles (Chuck) Durrett and gerontologist Alexandria Levitt likely have one solid answer.

AgeBlog spoke with them during week 12 of shelter-in-place orders, about their new book “State-of-the-Art Cohousing: Lessons Learned from Quimper Village” (Amazon or Levittcoho.com; $25) and how residents living in cohousing have fared well during the pandemic, why cohousing hasn’t spread across the U.S. as readily as one might expect and how to plan a project.

Durrett, age 64, has lived in multigenerational cohousing for 30 years (when he moved into his community there were 37 kids and 21 seniors), is a vocal proponent of the concept and thinks the typical single family home is inappropriate for older adults.

“Many elders cling to it as they fear institutions and fear losing their independence,” he said. And they think having to move out of their single family home is a clear demonstration that they are, in fact, aging, which they are in denial about.

Instead of toughing it out in a single family home, often divorced from needed services and people they know well, Durrett and Levitt hope older adults might consider forming cohousing projects with their peers, or as an intergenerational group.

Levitt happened upon the idea of cohousing while writing a paper on progressive housing for her gerontology masters at University of Southern California. She had read Durrett’s book, “The Senior Cohousing Handbook: A Community Approach to Independent Living,” wrote him a note and they have been “talking and learning together ever since.”

“We know social isolation is a tremendous health risk for elders,” said Levitt. “But if you know there are people outside your door to have dinner with or chat and it requires no driving, you make those connections.” Levitt also spoke about the intense bonds formed by working together to design and build a project and to run it day-to-day, in contrast to life in a corporate-owned retirement community, where older adults might meet for organized activities like bingo, with no one working toward a common goal.

“People who choose cohousing believe their own lives will be better if they cooperate with neighbors for the benefit of the whole,” said Durrett. In his community residents share one lawnmower, one pool and one hot tub for 34 houses. But, he said, “the big side project is community—you buy into the community, and the house comes for free.”

Cohousing adheres to six essential principles: 1. future residents participate in the design; 2. there are extensive common facilities; 3. projects are completely owner-managed; 4. projects are designed to facilitate community; 5. there is no hierarchy in decision-making; and, 6. there is no shared economy beyond what it takes to build the project.

“First and foremost, cohousing means the future residents plan the project. It has been my experience, especially with seniors, that no one makes housing more appropriate to life’s issues than the residents themselves,” said Durrett. Having designed 55 cohousing projects in the United States, Durrett knows a bit about the topic.

The crux of the idea is that the elders choose and purchase land or an existing building, design the project (with the help of a licensed architect), and once it is built benefit from having peers and potential friends close by to rely upon for companionship and help in times of need. There are substantial shared spaces for gatherings or occasional communal dining, and often-shared art studios and other such amenities. Houses tend to be smaller than a typical single family home, but any square footage missed is made up for in common spaces and outdoor areas.

The new book details the creation of Quimper Village in Port Townsend, Washington, which is a small town about two hours from Seattle (via ferry over the Puget Sound and continuing by car). Designed by Durrett, Quimper Village is a community of 40 residents occupying 28 units on 6 acres of land (4 acres of which is open space). To help share the experience gleaned from this cooperative process, Durrett organized a conference hosted by the Village to describe for other interested parties how the project got built. Afterwards, Levitt said she realized they had the bones of a book—between their first-hand experience planning and building the project and the information dispensed at the conference. The co-authors then interviewed residents and gathered photos to detail the project.

The resulting “State-of-the-Art Cohousing: Lessons Learned from Quimper Village” makes a great template for anyone seeking to launch a cohousing project of his or her own.

Levitt and Durrett have been following the impact of COVID-19 on Quimper residents (zero cases so far) and protocols put in place to prevent its spread. “They got serious from day one,” said Durrett of Quimper residents, “they put policies in place where they could socially distance but not socially isolate.”

As Carolyn Salmon, a Quimper Village resident says, “Our members practice safe distancing and wear masks if there is an identifiable possibility of getting too close to each other.  We do not have any inside activities and sadly, no community meals. We have recommended that members always wear masks when they leave the community. Members who have traveled have voluntarily self-isolated for up to 14 days to protect the community. We’ve tried to follow the Governor’s guidelines. We have very few visitors from outside the community and those that do come are asked to wear masks.  Fortunately, the weather has been pretty benign so we can spend a lot of time outside … even doing Tai Chi on the fire lane daily.”

Levitt said Quimper residents leapt into action because they are near the coronavirus epicenter of Seattle and one resident was at the time commuting to the city for work. “There was an urgency to get on top of it.”

“I’m so grateful that I live here,” one resident told her, “and not in our big house where we were by ourselves.”

In his community, Durrett said they have systems in place to check on everyone by phone and there are five designated shoppers for the older adults. “We’re doing everything we can to keep them out of the grocery store. Most importantly, we have meetings often to talk about how to be safe, mostly on Zoom. We often get together, too, because we have the real estate, so we can have meetings outside in the grassy yard, 10 feet away.”

Durrett also came to the realization recently that it’s easy to have a conversation 10 to 20 feet away from neighbors, porch to porch. If he had the urge, Durrett said, he could talk to five households at the same time, as their front doors are that close.

Levitt adds, “The virus has been a stress test for communities. And now they will have an opportunity to look back on it and see if they might do things differently in the future. It’s not unthinkable to have another epidemic, and could you instead quarantine with a small subset of who you’re living with? Or is it better to remain in your pods?”

All this interaction could be a critical element to preventing social isolation and loneliness in older adults. Durrett mentioned a recent Psychology Today article that said 40 percent of older adults in the United States felt isolated and lonely, and that was prior to the pandemic. It also spoke of loneliness’ deleterious effect on the human psyche and physiology, and said isolation is curtailing older adult lives by 10 years.

Also cohousing enables people to more easily survive physical issues (such as surgery) if they are not isolated, Durrett said.

“That connection between mental health and physical health is borne out in Wolf Creek (cohousing) in Grass Valley, Calif.,” said Levitt, where she met a 100-year-old woman who could no longer cook for the common house dinners, but had friends cook for her as she doled out instructions, and hired someone else to clean up afterwards. “If I wasn’t living here I wouldn’t be alive,” the woman had told Levitt.

“Cohousing is for people who are fit, who can function, and do the basic activities of daily life, but if there are challenges, you can rely on a built-in network,” Levitt adds.

With such positive attributes, why isn’t cohousing spreading rapidly across the United States? (There are approximately 168 built cohousing projects in this country.)

“People often ask me what the biggest challenge is with cohousing, is it the bureaucrats who regulate developments or the banks who loan the money to finance projects? But no, both of those have been fine,” said Durrett. “I’ve built 55 projects and the biggest issue is our culture. … Our culture is steeped in seniors being in denial, thinking that they don’t need anyone else, they can still pull themselves up by their bootstraps, while on the other hand, a group of affiliated people can do so much for each other.”

“This is about redefining the American dream, so it’s not just me in my ranchette. … Our culture of loneliness and over-consumption is ready to morph and cohousing is one of the many ways to address that.”

To read Durrett and Levitt’s book, access it here.