The Reality of Family Caregiving in Diverse Communities: Findings from a National Study 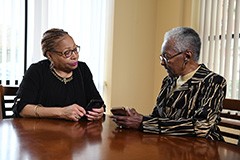 By Jenna McDavid and Ocean Le

With 10,000 adults turning 65 every day and a shortage of geriatricians to support older adults (according to a study by Dr. Adam Golden in the September 2015 issue of Academic Medicine), the health and wellbeing of our aging population will heavily rely on informal caregiving – one of the most overlooked challenges facing the U.S. today. In addition to the concerns of caregiver availability and ability, our aging population is also becoming more diverse, with an estimated 3 in 10 older adults identifying as a person of color by the year 2030. Similarly, there will be an increased reliance on diverse sexual and gender minority caregivers, as the lesbian, gay, bisexual, and transgender (LGBT) older population is also projected to double in size to at least 4 million people during that time (according to a report by the Center for Disease Control and Prevention in 2013, The State of Aging & Health in America).

Governments, organizations, and researchers are beginning to prepare for this demographic shift through legislation, programs, and support services for family caregivers; however, there is a scarcity of information in addressing the implications of culture in caregiving. To address this concern and to prepare for a diverse aging population, the Diverse Elders Coalition has partnered with The John A. Hartford foundation on a multi-year project aimed at improving the multicultural capacities of healthcare providers to better serve diverse family caregivers.

Founded in 2010, the Diverse Elders Coalition (DEC) comprises six organizations working to improve aging in diverse communities: the National Asian Pacific Center on Aging (NAPCA), the National Caucus and Center on Black Aging, Inc. (NCBA), the National Hispanic Council on Aging (NHCOA), the National Indian Council on Aging, Inc. (NICOA), SAGE, and the Southeast Asia Resource Action Center (SEARAC). Together, the DEC advocates for policy change on behalf of the millions of diverse older adults that make up our communities across the United States. Although the coalition’s advocacy efforts have historically focused on diverse older adults, we recognize the vital role that caregivers play in supporting the health of the older adults in our communities. To that end, the DEC has elected to broaden our focus to improving the health and wellbeing of diverse family caregivers, an underserved population whose vitality and resilience are essential to the vitality and resilience of diverse elders.

To better understand the unique needs and realities of diverse family caregivers, the Diverse Elders Coalition developed a comprehensive caregiving survey in partnership with the Benjamin Rose Institute on Aging. This nationwide survey was disseminated both online and in-person in early 2019, and it was available in eight different languages. Ultimately, the DEC collected a total of 940 completed surveys, of which 789 respondents self-identified as one of the five racial/ethnic groups or being LGBT. This is noteworthy because it is one of the first examples of caregiving research where multiple diverse groups were compared at the same time. Survey analysis has begun to reveal the magnitude of different issues affecting diverse family caregivers, such as difficulties translating healthcare material from English into their native languages and facing discrimination in the healthcare setting based on race, gender, sexual orientation, or other factors. We have learned from the survey that caregivers who perform “cultural tasks” – such as interpreting at the doctor’s office for their care recipient, or helping their care recipient navigate the U.S. immigration system – had significantly higher levels of four types of strain and depression. Caregivers’ difficulties performing these cultural tasks may also contribute to the low support service utilization, which our survey revealed to be an average of just 2.4 services utilized across all diverse family caregivers who responded.

Survey analysis will continue throughout 2020, but we look forward to sharing our research to date with participants at this year’s Aging in America Conference in Atlanta, GA. Our session, “The Reality of Family Caregiving in Diverse Communities: Findings from a National Study,” takes place on Wednesday, March 25th, 2020 at 5:00 PM – 6:00 PM in room Embassy E. Staff of the Diverse Elders Coalition and the Benjamin Rose Institute on Aging will share what we have learned so far and what is yet to come. Findings from the caregiving survey will be complemented by an extensive literature review and information gathered from focus groups conducted with diverse family caregivers, and this project supports one of the top recommendations of the National Academies of Sciences Families Caring for an Aging America report: “explicitly and consistently address families’ diversity in assessing caregiver needs and in developing, testing, and implementing caregiver supports.”

Jenna McDavid is the National Director for the Diverse Elders Coalition. She works with the coalition’s six member organizations to craft training, education, and policy solutions to improve aging in racially and ethnically diverse communities, LGBT communities, and American Indian/Alaska Native communities.

Ocean Le is the Program Associate for the Diverse Elders Coalition. He was a former intern of The John A. Hartford Foundation before going on to obtain his Masters in Human Nutrition at the Institute of Human Nutrition, Columbia University Medical Center.

The John A. Hartford Foundation

Quick to Connect: SoFIA Moves Fast to Launch Remote Tech Training for Elders
posted 04.05.2020
In response to the COVID-19 outbreak, the South Florida Institute on Aging (SoFIA) has launched SoFIA Tech Connect, which allows older adults who are… Read More