Rituals as Markers of Transition 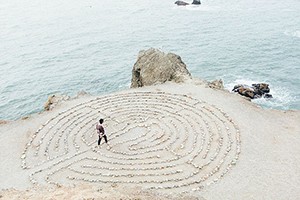 By Richard Address and Nancy Gordon

Richard Address, recently wrote a chapter in The Essential Spirit titled: “Using Rituals to Engage the Spiritual.” What follows is selected portions of that chapter:

Not so many years ago, a man in his 50’s, let’s call him Paul; approached his clergy person with an unusual request. Paul’s wife had died about a year and a half prior to this meeting. He had completed over a year of mourning. His request was simple. He asked that the following Sunday afternoon, after Sunday school had finished and the building was quiet; that he and a few close friends and family return to the sanctuary and there, at the very location where he was married and where his wife’s funeral began; that a ritual be recited to allow him to remove his wedding ring. Paul needed this ritual to formalize his transition into his next stage of life. It was a very personal ritual, created by his clergy just for him and this moment; yet, done in the setting that spoke to Paul’s religious tradition and community. He was asking his community, his clergy and his God to give permission to move on with life.

Paul’s choice to create a personal ritual of transition within the context of his faith tradition as well as his so called secular community is symbolic of a growing trend to re-vision and, in some cases, re-invent religious rituals in order for them to speak to new life stages and challenges that impact our lives. This trend, driven, I believe by the aging of the baby boom generation, and speaks to many issues, among them being a desire to mark special moments in religious contexts as well as a re-emergence of the pursuit of a personal spirituality that often evolves outside of the parameters of traditional religious institutions. This trend of re-examining ritual’s importance and a desire to explore one’s spirituality becomes even more pronounced as we confront our own aging, and in doing so, our own mortality.

The revolution in longevity is creating new opportunities for new rituals, rituals that speak to new life stages and situations. The rituals are, at times, a reworking of a traditional, often a religious, ritual. Then, as we shall explore, there are those moments when a specific moment or event serves as a catalyst for the development of a new ritual, a personal expression of one’s spiritual journey, such as the ritual for the removal of the wedding ring.

Rituals help bring meaning to life because they help sanctify time. They lift an ordinary moment into a moment of meaning, a meaning that, in a spiritual sense, helps place the participant into a sacred context. While a prayer can often be spontaneous, a ritual often will follow a prescribed script. It is the playing out of the script that we often build to a climax that gives to those participating that sense of meaning.

The Old and The New

We are witnessing a sense of freedom in that we see the re-visioning of old rituals and the creation of new rituals. This is especially present in the realm of religious rituals and may have a lot to do with changing belief patterns as we age. The theology that we affirmed in our youth may be undergoing its own restructuring as we progress on life’s journey. For rituals to stay relevant, they need to be open to include the changes that an individual (or community) may encounter.  The desire for a greater sense of intimacy and relationships is a major factor in how we, as we age, see ritual.

The Spiritual Embrace of Life

Longevity has made it possible to encounter new life stages and moments that have opened the door to creative development of new ritual. These newly developing rituals may have one foot in tradition and one foot in some new circumstance.

There are elements of transition and transformation in these new rituals for longevity. They recognize that aging is a transition and also support those moments of personal and spiritual transformation. The openness to create these rituals may also give older adults a fresh means of connecting with friends and religious communities, with their values, wisdom and experience. These rituals can also be a model to younger generations; teaching them that religious rituals can speak to new experiences and help place those experiences in a sacred context.

Rituals then are the pathways that allow a person’s spiritual search for their own meaning to have a tangible, personal reflection in real life. They may be rooted in tradition or may spring organically from a specific need at a specific time. What is true is that they help give a human being a sense of being part of something beyond their own self. Rituals help bring meaning to specific moments of random time, elevating that time from ordinary to something that is special, or, holy. In this age of longevity, with new life stages emerging, the use of ritual to celebrate and commemorate these moments has never been more present.

Editor's Note: This is a republished blog, January 9, 2017,  by Nancy Gordon and Rabbi Richard Address. Rabbi Address’ complete chapter can be found in The Essential Spirit: Providing Wholistic Services to and with Older Adults, Donald R. Koepke, Ed. (Wipf and Stock, 2016).