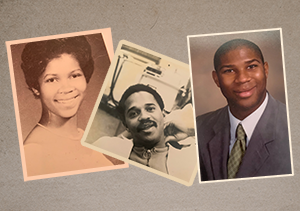 ASA is excited to announce a new series, Voices on Caregiving, as part of its commitment to uplifting the experiences of BIPOC community members. In this series, we hear from a diverse group of family caregivers about their caregiving journeys, how caregiving affects the rest of their lives and what happens when they are no longer caregivers. Some are from the Sandwich Generation, some are Millennials, some are older adults—but all of their stories are relevant to ASA members and beyond.

Millennials aren’t generally the first generation that comes to mind when we think about caregiving. In 2014, John Poole became his parents’ primary caregiver at age 30. He cared for his mother and father for six years. Through his story we learn about the isolation he felt from his peers, his struggle to maintain a personal identity while performing his caregiving role, and the challenges he faced in learning to navigate care systems.

Voices on Caregiving: John Poole from American Society on Aging on Vimeo.

In the early part of 2014 my parents both had strokes within a month of each other. My father had had a second stroke in February of 2014. Two days after you came home from rehab, my mother had a massive stroke.

I suddenly had two people who I was responsible for the care for. I was 30 years old and I was working full time in state politics. And I was also involved in a master's program for public policy, which because of all the changes with their health, that kind of fell by the wayside. I had to withdraw from that program, unfortunately.

I soon learned how fragmented the healthcare system was as far as people, not giving you the relevant information that you needed when you needed it. And that resulted in me deciding that the best route was for me to the take this time to manage their care full time. At the the time, back then I didn't know how long it was going to be. She actually came home on hospice. And everyone knows that Hospice is six months to a year. So I figured at that point in the summer/fall of 2014, I figured she probably has about a year to live.

I looked at the situation as, "This is a very temporary situation. And you just need to focus on this for the time being so at least she can return to her home and be around familiar surroundings for the time that she was alive. The remainder of her life."

It was it was definitely a major adjustment period. And especially being this age, I was only 30 when it happened, so I didn't know to many people in my peer group who in experienced this. And, of course, I know about caregivers through family members and different acquaintances. I did not know how all-consuming the role could be. Before I thought that, between insurance and government programs, that people people will be covered and your needs will be met, for the most part. I didn't realize how there was such a gap in just services in public for a lot of people unfortunately.

The truth is, and I'm not alone in this I know from what I've read from other caregivers and their experiences, it does feel isolating in the sense that you feel like this is work and people outside of the situation they may not understand how how taxing it is. When people find out you're handling the care of a loved one, I don't think it always registers as, "This is actually work that they're doing. Because if they weren't doing it someone else would be paid to do it."

So that was difficult because at the end of the day you're exhausted physically and mentally. And yet to an outsider, someone who's not in the situation, you're just home all day. I think that people feel unfortunately that *chuckles.* I laugh not because it's funny. It's kind of like ironic. I think people think caregivers just give someone a glass of water with their medicine. And then you make them a sandwich and go and watch TV. And that's not the case at all.

So my advice would be, and I know this is difficult - I struggled with this for a long time, never forget that this role will not last your whole life. It seems that way because it can be so overwhelming. There's so much responsibility attached to it, that people forget that they will have a life when all this is over. So I would recommend that people will try their best to take some time and just try to focus on your future. So when all this is over, when this period of your life is over, there will be a smoother transition back into the, as they say the real world. But we all know that caregiving is a real world also. It's kind of like a parallel universe, almost.