Women and Medicare: An Unfinished Agenda

For fifty years, Medicare has played a critical role in promoting economic security for older women in the United States. Today, Medicare serves 24 million women ages 65 and older, representing 56 percent of older adults enrolled in the program, and provides them with financial protection at a time in their lives when they have the greatest need for medical care and often the fewest family and economic resources. The passage of Medicare in 1965 marks a key milestone in women’s economic security and a major contribution to reducing income equality in old age between men and women.

Viewing Medicare through a gender lens can help illuminate its programmatic strengths and shortfalls, which often are masked when the program is considered in aggregate. There is no doubt the program has made a critical difference in the lives of millions of women. Gaps in coverage, however, notably the lack of coverage for long-term-care services and supports (LTSS) and high out-of-pocket spending continue to place a disproportionate burden on women. These gaps still can lead to sizable and sometimes crushing financial burdens for many women and their caregivers.

The Status of Older Women Before Medicare

In the years prior to the passage of Medicare, societal norms left many women at a considerable social and economic disadvantage. For older women, these “norms” translated into higher rates of financial insecurity and fewer social supports. Although workforce participation of women had been rising since the 1940s, in 1965, only 39 percent of women were in the paid workforce (compared to 81 percent of men) (Bureau of Labor Statistics, 2014). Among women with full-time jobs, the gender wage ratio, also known as the “wage gap,” was 60 percent (Blau and Kahn, 2007). This meant that women not only were less likely to earn an income through work, but that when employed, they earned a lower wage than men. (You only have to watch an episode of Mad Men to see how this discrimination played out in the workplace.)

This meant women not only accrued fewer savings throughout their lives, but also, unless they were married, they had limited access to retiree benefits, particularly pensions. In 1966, the year that Medicare was first implemented, one-third of women ages 65 and older lived in poverty, compared to nearly a quarter of men (U.S. Census Bureau, 2014). The poverty rates of working-age adults were considerably lower at the time. Nearly fifty years later, only one in ten women ages 65 and older live in poverty. That rate is still nearly twice that of men (see Figure 1, below). 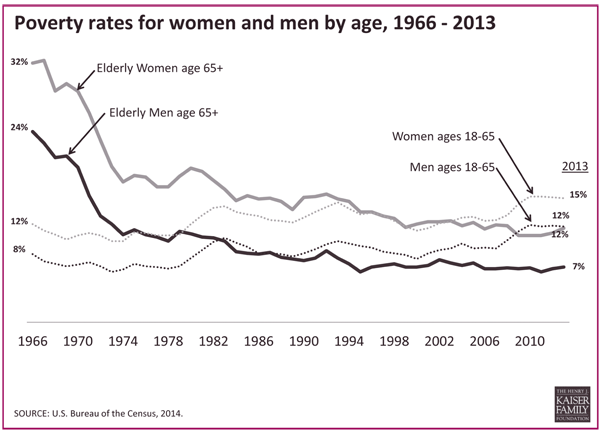 In the 1950s and 1960s, the share of working-age Americans with hospital insurance was rising, with nearly three-quarters reporting access to that financial protection. In contrast, coverage rates for older Americans were far lower, with just over half of older adults (56 percent) in 1965 reporting any kind of insurance for hospital care (Harris, 1966). The share of older women with coverage likely was even lower, given their weaker workforce attachment and higher likelihood of living alone or being widowed by the time they passed their prime working years.

There is little published information about gender-based differences in health status, use of healthcare, and the economic burden of healthcare costs for older Americans in the era predating Medicare. What we do know is that in 1960, women turning age 65 could expect on average to live nearly sixteen more years—three years longer than men—and the top five causes of death for women were heart disease, cancer, cerebrovascular disease, accidents, and influenza and pneumonia (National Center for Health Statistics, 1965). These conditions often required medical care and hospitalization, but did not result in protracted periods of disability that necessitated paid or unpaid family care.

Since it was signed into law fifty years ago, the Medicare benefit package has expanded and evolved in ways that have provided additional assistance to older women to cover healthcare. When the program was first enacted, the benefit package had a strong focus on hospital care, which was similar to most private insurance plans available at the time. Preventive care and prescription drugs were not typical insurance benefits, as they are today. Medicare did not routinely cover Pap smears until 1990 and did not cover screening mammography until 1991 (Gornick et al., 1996). Once it provided coverage for these services, it required 20 percent co-insurance, which meant that women still could have significant out-of-pocket payments for these preventive services as well as for clinical breast exams, bone density tests, and pelvic exams—sometimes resulting in barriers to care.

In 2010, when the Affordable Care Act (ACA) was passed, coverage of recommended clinical preventive services under Medicare was broadened by the elimination of any cost-sharing for preventive services rated as highly effective by the independent United States Preventive Services Task Force, including mammograms, Pap smears, and bone density screenings. Also included was no-cost coverage of a personalized health plan with an annual comprehensive risk assessment, which for women is comparable to a “well woman” visit.
Another long-standing gap in Medicare was the absence of drug coverage. While women use more prescription drugs throughout their lifetime, after age 65, men catch up, and by the time they are in their 80s, the use rates are similar (Centers for Disease Control and Prevention [CDC], 2013). In 2003, the Medicare Modernization Act established Medicare Part D, offering prescription drug coverage to Medicare beneficiaries through new private stand-alone drug plans, as well as Medicare Advantage plans. Particularly important to women who are disproportionately low-income, the drug benefit offered the Low-Income Subsidy of premium and cost-sharing subsidies for low-income beneficiaries. Not surprisingly, women make up the majority of the beneficiaries who qualify for the subsidy, largely because they have lower income and fewer assets (Meijer, Karoly, and Michaud, 2009).
A Profile of Women on Medicare Today
Today, in contrast to fifty years ago, more is known about gender-based differences and disparities, when it comes to health, social supports, and financial security. We know women and men can have differential risks for the same diseases, experience different symptoms for the same conditions, and receive different levels of treatment by healthcare providers (Institute of Medicine [IOM], 2001, 2010).
While older women today still experience longer lifespans than men, the gap has decreased to five years (CDC, 2013). Compared to men, however, women have higher rates of chronic illnesses, often with physical and cognitive impairments such as memory loss or dementia that limit functionality and hinder their ability to live independently (see Figure 2, below).
Figure 2 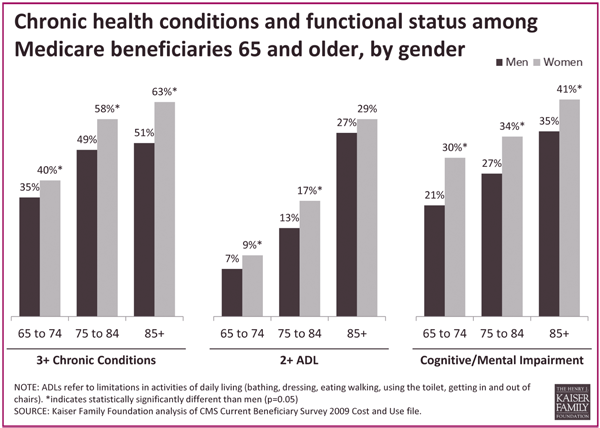 Social and economic circumstances continue to affect women’s need for support. Despite the dramatic fall in poverty rates over the past fifty years, older women still find themselves at an economic disadvantage compared to men. Because women have lower paying jobs than men during their working years, and because many work part time or leave the workforce for periods of time to raise families or care for aging family members, they receive lower average Social Security and pension benefits than men. Among Medicare beneficiaries ages 65 and older, women have lower median per capita income than men ($21,853 compared to $27,480), as well as considerably lower median financial assets and retirement savings ($65,802 versus $93,371) (Kaiser Family Foundation, 2013). Women older than age 65 are widowed at nearly three times the rate of men (44 percent versus 14 percent), attributable to women’s longer life expectancy, the tendency for women to marry men who are slightly older, and higher remarriage rates for widowers (to younger women). Women also live alone at twice the rate of older men (38 percent versus 19 percent). As women age and their health needs grow, these social challenges translate into greater need for informal and paid LTSS.
Out-of-Pocket Costs
Despite providing important benefits, Medicare still falls short for many women and men. On average, it only covers half of healthcare costs, with individual payments and supplemental insurance policies filling in the rest (Centers for Medicare & Medicaid Services [CMS], 2010). It does not pay for hearing aids, eyeglasses, or dental care, nor does the program cover extended nursing home stays or personal care needs, all critically important to most older adults. In addition, Medicare charges relatively high cost-sharing, with deductibles in 2015 of $1,260 per benefit period for Part A inpatient care, $147 for Part B medical services, and up to $320 for Part D drug benefits (CMS, 2015). Furthermore, most Medicare benefits, including physician visits and prescription drugs, are subject to copayment or co-insurance. Medicare Parts A and B, which cover outpatient visits and hospital care, also have no limit on out-of-pocket spending.
Gaps in benefits and cost-sharing requirements, together with spending for premiums for Medicare and supplemental coverage, result in high out-of-pocket expenses for many people on Medicare. Again, older women shoulder a disproportionate share of the cost. Older women on average in 2010 spent more on healthcare (including premiums) than older men ($5,036 versus $4,363) (see Figure 3, below). For all
older Medicare beneficiaries, out-of-pocket spending escalates with age, but women ages 85 and older, in particular, have considerably higher out-of-pocket costs than older men, largely due to their poorer health status, greater social isolation, and dependence upon paid LTSS. Notably, among women ages 85 and older, spending on LTSS was 50 percent higher ($3,954) than it was for men ($2,694) (CMS, 2010). Among women ages 85 and older, 60 percent have incomes below $20,000 per year, which could make the costs associated with LTSS extremely difficult to shoulder.
Figure 3 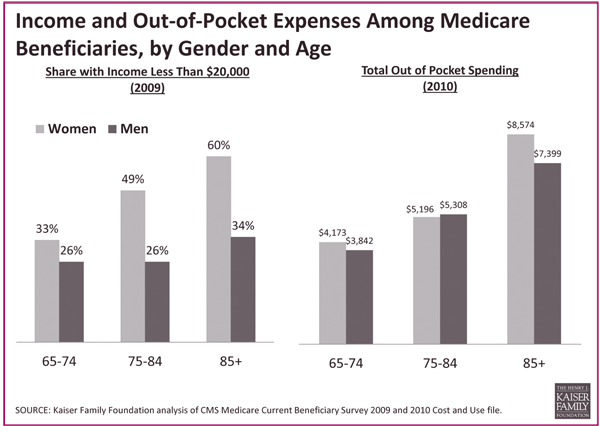 Alina Salganicoff, Ph.D., is vice president and director of Women’s Health Policy at the Kaiser Family Foundation in Menlo Park, California. She can be contacted at alinas@kff.org.

The entire Summer 2015 issue of Generations is available on AgeBlog thanks to the generous support of The Benjamin Rose Institute on Aging, Compassion & Choices and Robert Wood Johnson Foundation President's Grant Fund of the Princeton Area Community Foundation. Click here to read more.

This article is taken from the Summer 2015 issue of ASA’s quarterly journal, Generations, an issue devoted to the topic “Medicare at 50” ASA members receive Generations as a membership benefit; non-members may purchase subscriptions or single copies of issues at our online store. Full digital access to current and back issues of Generations is also available to ASA members and Generations subscribers at Ingenta Connect. For details, click here.

National Alliance for Caregiving and AARP 2004. Caregiving in the U.S. Retrieved January 8, 2015.

CMS Helps States Address COVID-19 with Section 1135 Waivers
posted 04.01.2020
The President’s declaration of a national emergency for the COVID-19 outbreak provided the Centers for Medicare and Medicaid Services the authority… Read More

A Day in the Life of a Caregiver
posted 03.31.2020
Though caregiving is demanding and draining, she reminds herself again that what she is doing for mom and Tom really matters. Read More