Find ASA members in your area or who share your interest area. Enter a name or click on the magnifying glass to start your search.

The number of people with Alzheimer’s disease, the most common cause of dementia, is projected to increase to 13.8 million by 2050. As the disease progresses, individuals with dementia become more dependent upon others for assistance with daily activities. Ultimately, in advanced dementia, people with the disease need assistance with basic tasks, such as eating.  To help educate about and help combat Alzheimer’s, ASA is pleased to make available information developed in 2017 by the experts at Research Triangle Institute International and funded by the Administration for Community Living in conjunction with the National Alzheimer's and Dementia Resource Center (NADRC). Presented here is a Generations supplement, numerous web seminars, and a description of a program which will be presented during the 2018 Aging in America Conference.

Scroll down to explore more.

Generations: Supporting People with Dementia and Their Caregivers in the Community 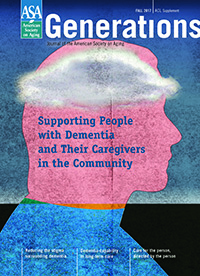 The number of people with Alzheimer’s disease, the most common cause of dementia, is projected to increase to 13.8 million by 2050. To help educate about and combat Alzheimer’s, ASA is pleased to introduce a special supplement to Generations, “Supporting People with Dementia and Their Caregivers in the Community.”

The supplement focuses on efforts underway to establish dementia-capable home and community-based service systems, and to develop effective, evidence-based services for people with Alzheimer’s disease and related dementias and their caregivers. The content features research and writing by dementia experts at RTI International, as well as many others well-known in the field of dementia research and advocacy. This content paves the way for service providers, families, and caregivers to provide person-centered, evidence-based, effective home- and community-based service systems for people with dementia and their caregivers.

This supplement to Generations was funded by the Administration for Community Living (ACL), at the U.S. Department of Health and Human Services, in conjunction with the National Alzheimer’s and Dementia Resource Center, which is funded by the ACL and staffed by RTI International.

In this webinar series, the Administration for Community Living’s National Alzheimer’s and Dementia Resource Center has partnered with ASA. This webinar series will address various issues related to Alzheimer’s disease and dementia. Free CEUs are available for up to 60 days after the live event.

Previously Recorded Events in This Series

As States Loosen Restrictions, Let’s Not Leave Older Adults Behind
posted 05.29.2020
As our nation’s population at large has discovered, staying in presents challenges, especially with procuring food—and for some older adults, such… Read More